Finally Got the QRZ 50 States Award 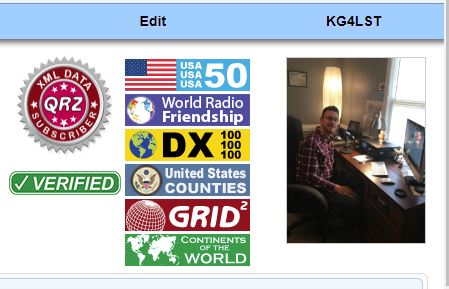 Since first getting into radio when I just a kid, I've always been fascinated by DX.  I still love making long distance contacts and shrinking the globe.  I realized at some point that I had made contacts with over 170 countries, every continent, and some maritime mobile (/MM) and aeronautical mobile (/AM) stations...but I had not yet gotten all 50 states confirmed.

The biggest challenge for me was the fact that several of the states that I had worked, would not confirm the QSO on QRZ.  For example, I had worked Alabama several times on 80m phone, but those folks were just saying hello and apparently didn't log the QSO.  I had worked Kentucky several times (even a KY QSO party), but none were confirmed on QRZ.

Finally with some help of my friends, I was able to get another QSO with AL and 2 more with KY.  All were asked to confirm on QRZ and on Thanksgiving night 2018, I was granted my QRZ 50 States Award!

The award was the last one that I needed to have gotten all the awards QRZ offers.  The other special thing is that I obtained all awards within 1 year of getting on the HF bands!

Thanks to all the stations I've worked (and confirmed Hi Hi).