I was busy yesterday setting up my new Daiwa CN-901HP meter.  Once it was hooked up, I wanted to do some testing and make sure that it was within calibration.  I tuned to the 20m FT8 frequency so I could work a few stations and test the meter.

It just so happened that FK8GX in New Caledonia showed up calling CQ.  I had seen a station from New Caledonia before on FT8 (quite possibly the same station), but was unable to work them.  I noticed the signal was -04 which seemed very workable.  I called for FK8GX and got a reply quickly!  We worked all the way to the 73s and he gave me a signal report of -13.  Not too bad for 50watts into a dipole and contacting a station 8,200+ miles away.

New Caledonia is a special collectivity of France in the southwest Pacific Ocean, 750 miles east of Australia.

Unfortunately, that was all I had time for on the radio last night. I had some other things to do and I went QRT with a new country in the log and knowing that my new meter is working fine.

A while back, I saw a station in Iceland on 17m FT8 and was unable to work them.  I did work Greenland that day!  More than a month later, I saw TF3PPN in Iceland calling CQ on 20m FT8.  To my surprise, I was able to get a response quickly and work the QSO all the way to 73 with no issues!  The station was very loud on me at a +01 and gave me a signal report of -05.

Iceland is a Nordic island country in the North Atlantic, with a population of 348,580 and an area of 40,000 square miles, making it the most sparsely populated country in Europe.  I'm glad to have both Greenland and Iceland in the log.  At over 3,200 miles, Iceland makes 136 countries that I've worked since setting up my current station in October of 2017! 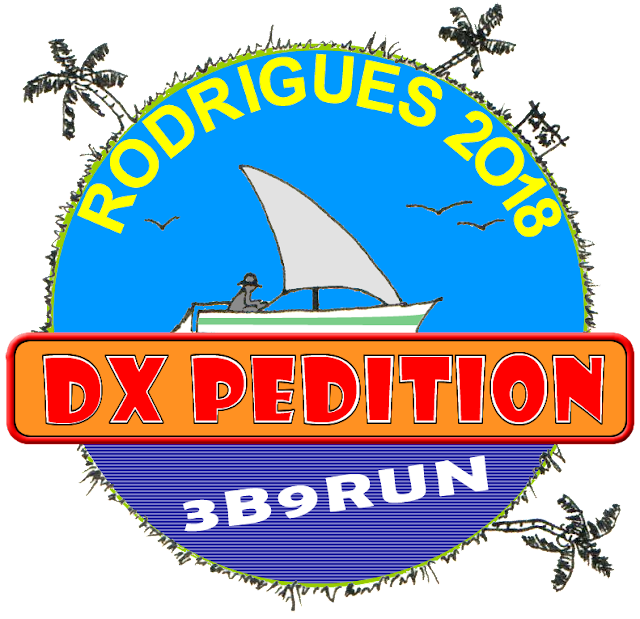 After working Rwanda on 17m SSB, I opened WSJT-X and tuned my rig to the 20m FT8 frequency and leisurely worked some stations while I watched a little TV and had a QSO on 2m FM.  That's one of the great things about FT8...you can multitask!  Right in mid-sentence on my 2m QSO, I saw 3B9RUN Rodriquez Island show up in the WSJT-X window.  I actually had no idea where that island was, which is usually a good indication that I wanted to work them!

I was able to work them pretty quickly, unlike the New Caledonia station that I called for a long time and never worked.  After we had completed the FT8 exchange all the way to the 73s, I logged him and looked up the island.

3B9RUN is the first DXpedition experience of the FR4KM team and will be active from Rodrigues Island May 11-16, 2018.

At over 10,000 miles from my QTH, I was glad to get them logged since they are only active for a short time! 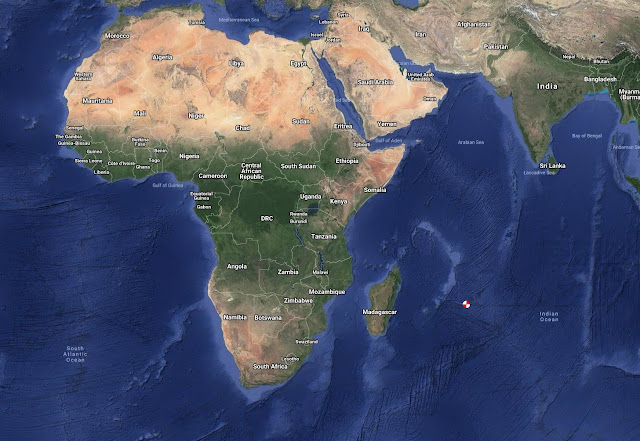 Rodriguez island is a 42 square mile autonomous outer island of the Republic of Mauritius in the Indian Ocean, about 350 miles east of Mauritius.  It is part of the Mascarene Islands which include Mauritius and Réunion. It is of volcanic origin and is surrounded by coral reef, and just off its coast lie some tiny uninhabited islands. 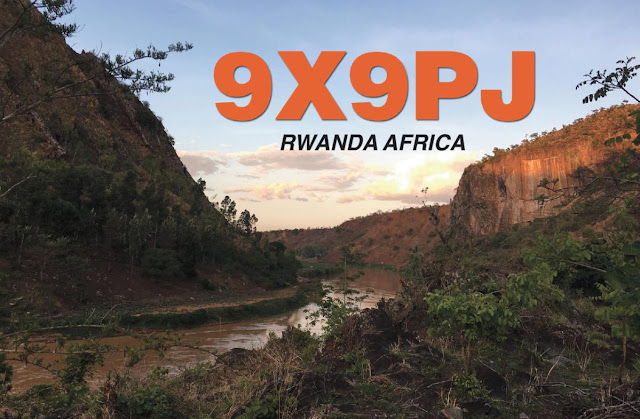 After moving my shack to a different room in my house, I wanted to get on the air and make sure that everything was in good working order.  I reconnected my antennas and checked the SWR.  Everything looked good!

I saw a spot on the DX Cluster for Rwanda on 17m phone.  I changed to the frequency 18.155 mHz USB and listened.  Sure enough, somewhat in the noise, there was Peter Jewitt - 9X9PJ!  I knew I'd need my Ameritron AL-811H to make the contact, so I moved a few kHz off the frequency and tuned up the amp.  When I returned, I called a few times and got a reply.  Peter was about a 53 on me but even with the amp only gave me an RST of 43.  I still consider that a great contact of over 7,600 miles on the 17m band!  I'm also pleased that the QSO has already been confirmed by Peter on QRZ!

Rwanda is a sovereign state in Central and East Africa and one of the smallest countries on the African mainland. Located a few degrees south of the Equator, Rwanda is bordered by Uganda, Tanzania, Burundi and the Democratic Republic of the Congo. Rwanda is in the African Great Lakes region and is highly elevated; its geography is dominated by mountains in the west and savanna to the east, with numerous lakes throughout the country. The climate is temperate to subtropical, with two rainy seasons and two dry seasons each year. [wiki] 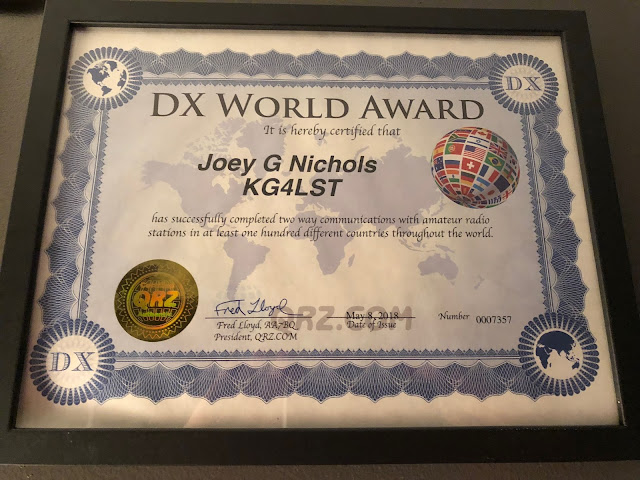 Thanks to the new stateside contacts I made, I got the "100 Counties Digital" endorsement  added to my QRZ "United States Counties" award.

This morning I imported confirmations from LoTW and found that I also achieved the QRZ "DX World" award!  This award is for successful two way communications with amateur radio stations in at least 100 different countries throughout the world.  According to my logbook, I'm actually up to 132 countries.  But, if they don't get confirmed they don't count.

I only need 4 more confirmations to achieve the QRZ "United States" award. The States award is the last award from QRZ that I need! (though I don't have all the endorsements available)

All contacts were made from my home QTH station since November of 2017. 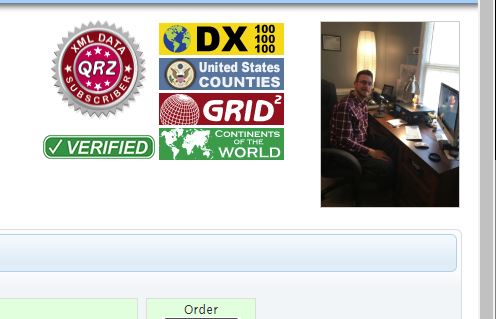 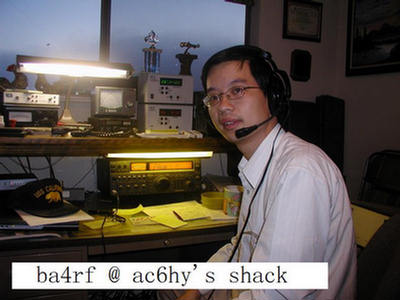 I've been trying for a while to work China and thanks to the great propagation for the last couple days, I was finally able to have a 20m FT8 QSO with BA4RF!

I was pleasantly surprised by the fantastic propagation that we had last night on 20m when I contacted Tajikistan at 10:20PM!  I was seeing several stations last night in China calling CQ, but none responded to my call.

This morning, I came into the shack to talk to some friends on 2m and was just looking at the 20m FT8 band activity.  I saw several stations in Russia, Kazakhstan, Scotland, Korea, and China.  I started calling for the Chinese and Korean stations since I had not previously worked them.  After a while, I finally got an answer from BA4RF in China!

It's so awesome to have this long distance contact in the log with just 65 watts and my Maxcon OCF dipole antenna! 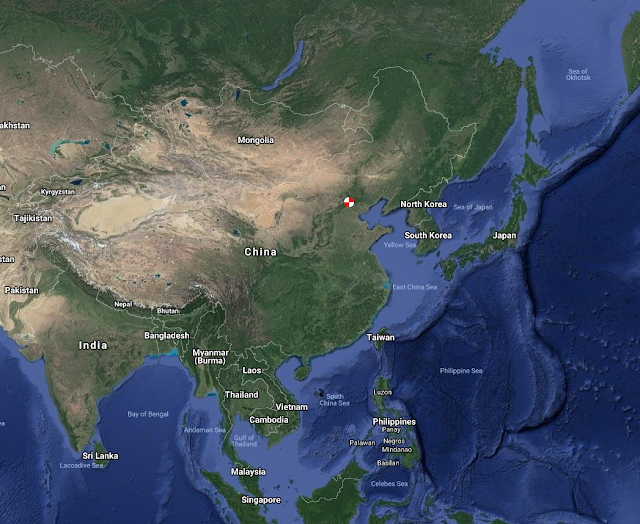 I spent some time playing radio on FT8 this evening. I noticed that the 20m band was staying active later than usual. I took the opportunity to work a few stations in Asia and Asiatic Russian.  While I was working an FT8 QSO, I saw EY7AD in Tajikistan spotted on the DX cluster.  Realizing it was already 10:20PM, I finished my QSO and then tuned to 14.208 USB. I could copy the station calling CQ at about a 53.  I called for him and was able to make contact!  He gave me an RST of 56 to 57!  At over 7,000 miles I was proud to make contact with this country for the first time...especially so late at night and on voice rather than a digital mode!

Tajikistan is a mountainous, landlocked country in Central Asia.  It is bordered by Afghanistan to the south, Uzbekistan to the west, Kyrgyzstan to the north, and China to the east.  I'm always learning more about Geography while I play radio!


73 de KG4LST sk
No comments:
Email ThisBlogThis!Share to TwitterShare to FacebookShare to Pinterest

Thanks to Brandon - KN4HDZ, I made contact with Greece today on 20m SSB!  Brandon had been working his radio and called to let me know that 20m had a good bit of activity.  He said he had just worked Greece on 14.250 mHz.  So I tuned over there and heard Gus - SV2CXI calling CQ.

I was able to work him quickly with a 59 and some QSB.  I was proud to get Greece in the log because I had not worked them before!

Greece is located at the crossroads of Europe, Asia, and Africa. Situated on the southern tip of the Balkan Peninsula, it shares land borders with Albania to the northwest, the Republic of Macedonia and Bulgaria to the north, and Turkey to the northeast. The Aegean Sea lies to the east of the mainland, the Ionian Sea to the west, the Cretan Sea and the Mediterranean Sea to the south.