I Think I Made Contact With Saudi Arabia - HZ1BL 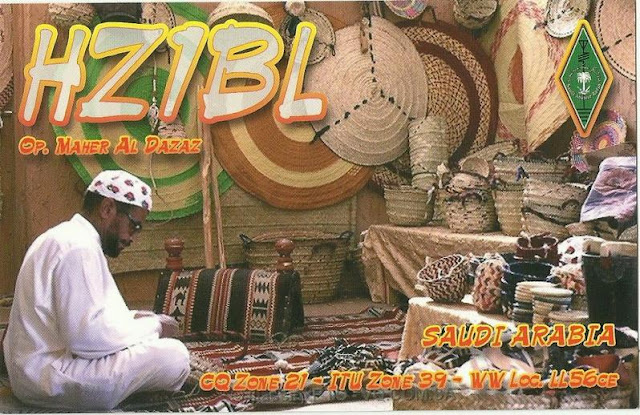 I think I made contact with HZ1BL in Saudi Arabia. I have to say "I think" because the signal was low and there was a large pileup.  We were on 17m using SSB.  I couldn't tell if he got my call correct or not and then he moved on.  That would be a great contact of 7,200+ miles. I'd be excited to log that on any band, but seems rare for 17m.

UPDATE 4/9/2018:
I've still not received a confirmation on QRZ, eQSL, LoTW, or HRDlog.  I'm hoping that he heard my call correct.  If not, maybe I'll get another chance once I get my triband beam put up. 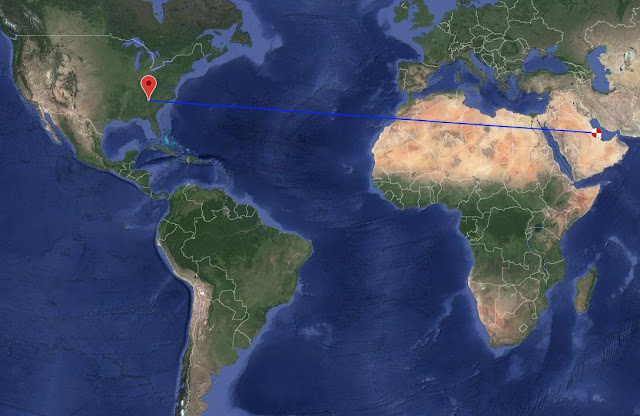 I am not much for contesting. I like the concept, but I've never really buckled down and made a serious effort in a contest.  I do use the contests as a chance to develop my skills and make contacts with some new DX entities.

Last weekend (March 24-25) was the CQ WPX SSB contest. It apparently always falls in the last full weekend of March.  Since I was messing around in the shack, I casually operated for a little while and made about 20 contacts.  Of those, 3 were new countries for me!

During the CQ WPX SSB contest, operators exchange signal reports (what I call the fake 59) and a serial number (just sequential number of the QSO).  So a typical exchange would be:

Once the contest is over, you would convert your log to the cabrillo format and submit it for review. Though I didn't really compete, I do convert my logs and submit them just for the practice of how to do it!

Among the entities worked were:


Most of the contacts were on 20m, but New Zealand, Australia, and South Cook Island were on 15m. 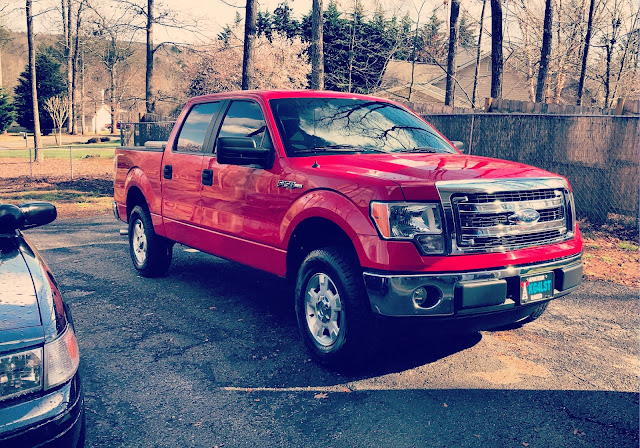 For now, I decided to use my ICOM IC-2300H VHF radio.  The truck has a convenient little pocket that was just perfect for holding the radio and another one that holds the microphone.  At some point, I'd like to get a Yaesu FT-7900 dual-band rig, but for now this will do the trick! 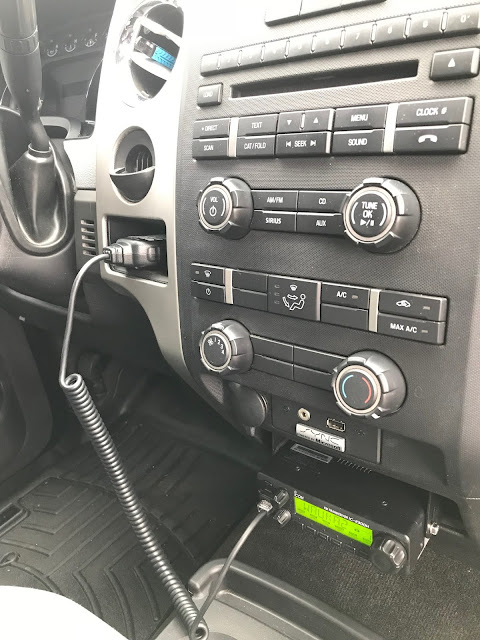 I've got a friend at a local Police "upfitter".  They sell and install equipment for police and emergency vehicles.  So I decided to let them drill a hole in the roof and install an NMO mount.  I reused my Comet SBB-5NMO antenna from my previous vehicle.  It's just a little on the tall side to be on the roof, but since I already have it I'll give it a try. If I have issues, I'll try to find a shorter antenna.  The upfitters ran the power wires directly to the battery terminals with fuses on the positive and negative lead.  Since my hearing can be a little weird, I may later use one of my Uniden external speakers. 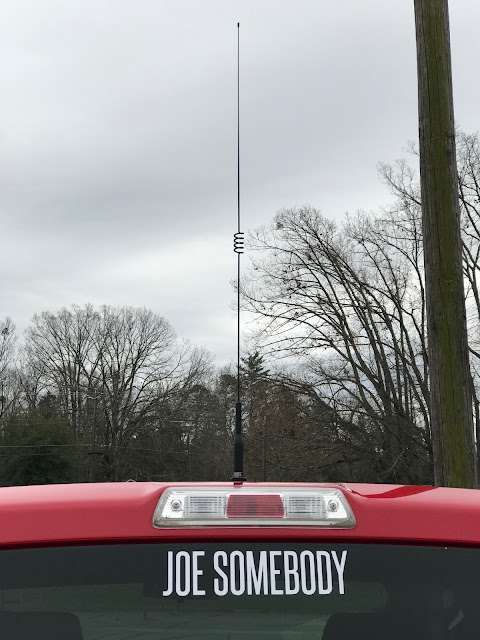 My friend Brandon (KN4HDZ) and his XYL have a Cricut machine.  They made the Joe Somebody (my youtube name) sticker as well as the Amateur Radio Tag below. 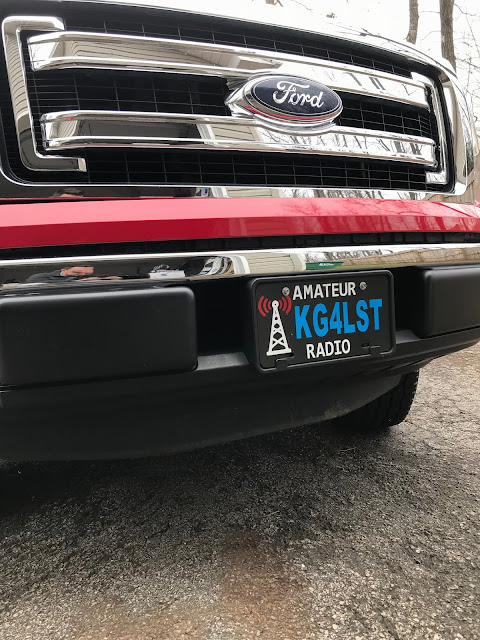 So that's the mobile rig for now.  Thanks for looking!

The Wind Took My Dipole Down

We had some high winds a few days ago that brought my dipole crashing down again.  The one flaw that I've found in my off-center fed dipole is that the crimp used to secure each leg to the insulators isn't very good.  Rather than an "inverted vee", my antenna is in a horizontal or "flat top" configuration.  When the wind was blowing, the trees that the antenna is hung in started to sway.  As they swayed, tension was put on the dipole which pulled the leg out of the insulator crimp.

To remedy this problem, myself and Brandon (KN4HDZ) came up with the idea to install a spring between the insulator on each leg and the paracord securing it to the trees.  That way as the trees sway, the springs will stretch and flex allowing the antenna to experience less tension.  I also used some screw-on clamps rather than crimps to secure the leg to the insulator.

Hopefully, this will keep the antenna in the air and my station on the air! 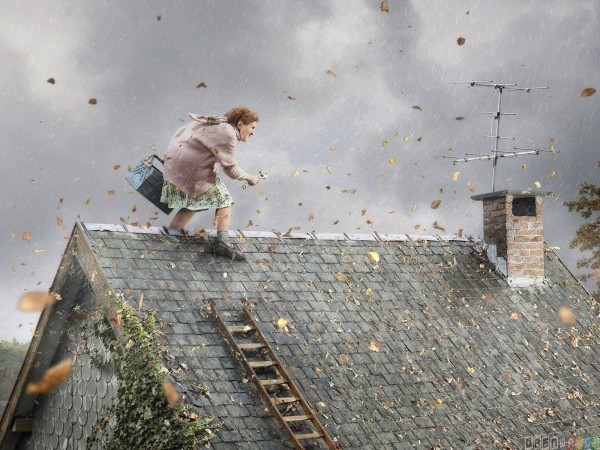 Since I got my Ameritron AL-811H connected and was ready to test it, I spent a little time on the radio over the weekend.  It's always great fun to make contact with these remote places.  Even though I haven't been traveling, my radio signal certainly was island hopping this weekend!  These were some of the more rare DXCC entities that I worked:

The Revillagigedo Islands are a group of four volcanic islands in the Pacific Ocean, known for their unique ecosystem. They lie approximately 390 kilometres (240 mi) southwest of Cabo San Lucas, the southern tip of the Baja California Peninsula, and 720 to 970 kilometres (450 to 600 mi) west of Manzanillo. They are located around 18°49′N 112°46′WCoordinates: 18°49′N 112°46′W. Technically part of the Mexican state of Colima, the islands are under Mexican federal jurisdiction.

Continue Reading »
No comments:
Email ThisBlogThis!Share to TwitterShare to FacebookShare to Pinterest

Picked Up an HF Amplifier

As luck would have it, right in the midst of trying to complete my Tower and Yagi project I ran across a great deal on an HF amplifier.  While meeting with one of the most well known hams in the area Terry Jones (W4TL) to discuss other matters, he casually mentioned that he had an amplifier for sale.  I've been trying to decide for a while now if I want an amplifier or just continue running 100 watts.  I had decided that if I was going to get an amplifier it would have to be an Ameritron AL-811H.  Well wouldn't you just know that is the exact amplifier that Terry had for sale.  We discussed price on Friday and I picked it up from his QTH on Sunday.

The amplifier fits nicely in the shack, but I still need some coax jumpers and a 10-pin to Phono plug cable to be able to use it.  I consider myself a casual operator and I felt like just getting the Yagi would help me get a few more countries in the log.  I really wasn't going to add an amplifier until after the Yagi project is done and I've had some time with it.  I have no idea how much I'll use the amp, but it was a good deal and I'm glad to own a piece of equipment that belonged to W4TL. 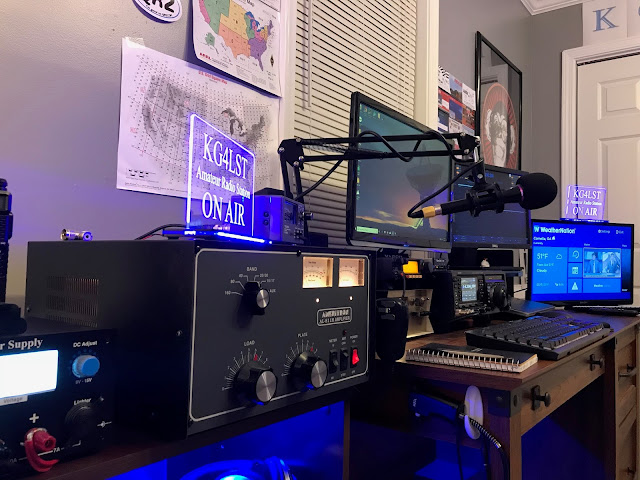